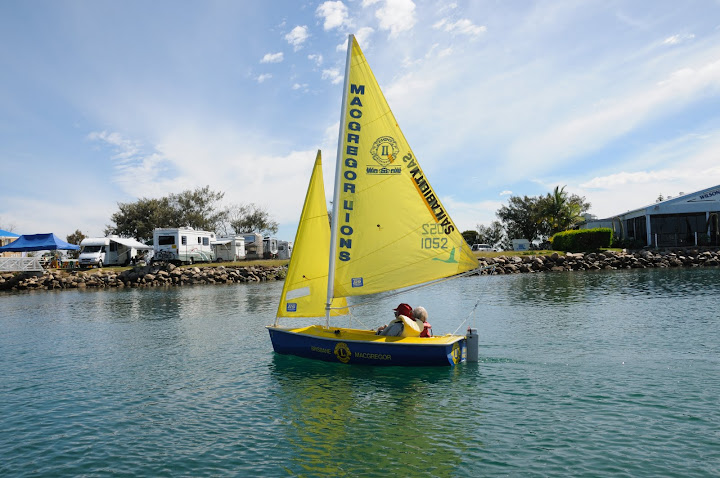 In January 2003 the Guest Speaker at the dinner was a handicapped person from Sailability.  He spoke about the way Sailability worked and showed a video of the project.

The video was filmed in Australia and at the Sailability World Championships in Japan.

The idea of providing a sailing boat as recreation for disabled people appeared to be a fantastic idea and something quite different to what Macgregor Lions had ever been involved in.

A video produced by the Gold Coast sailability Club showed sailability dinghies with disable persons at the helm was shown to the Lions Club of Macgregor.  After viewing the video there was unanimous Club support for the project.

In March 2003 finance was available for the purchase of a dinghy. Lion Doug Hardgrave took up the challenge to organise and purchase the new dinghy, sails and Lion decals for on the sail.

May 2003 Macgregor Lions Club manned a stand at Garden City to promote Lions and Drug awareness program. The sailability Dinghy was on display for the general public.

In June 2003, outgoing President John Harris presented Bayside Sailability with a 3.3 metre sailing dinghy at a cost of $8000.  This boat went into immediate use and in a short space of time there became a need for more boats.  The Lions Clubs of Capalaba and Griffith University have both supplied boats to Bayside Sailability.

In March 2004 the Macgregor Lions Club were committed to purchase a second sailability dinghy, which was presented to Bayside Sailability in 2005.

Further funds to pay off the purchase of a 21ft sailing boat, Faith, purchased from Sailability Gold Coast. McGregor also later provided funds for new sails for this boat.

Macgregor Lions Club has assisted with other equipment, such as special boxes to hold and transport the heavy keels used in the sailing dinghies.

Past President Paul Neal is actively involved in the project, taking clients sailing every week, from the Manly Boat Harbour.  They average about sixty clients a day, sailing approximately nine small craft and one 21ft sailing boat that carries six disabled clients plus support staff.

This is a fantastic project that deserves support from all service clubs.  Macgregor Lions Club will continue to support this project.

Return to the top

Click here to make a donation using a Credit Card or go the Sponsors page for other options.